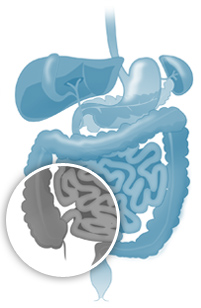 Celiac disease, characterized by malabsorption syndrome, is very common. It is caused by digestive intolerance to gluten proteins from certain cereals: wheat, barley or rye. In the most serious manifestations of this disease, there are significant vitamin deficiencies, undernutrition and staturo-ponderal delay (i.e. changes in weight and height with age), but this is exceptional.

Celiac disease affects both adults and children. Family cases were found in 3,6 to 20% of cases. It is also concomitant, in 50% of cases, with gastritis and/or lymphocytic colitis.

Sometimes asymptomatic, the celiac disease is however identified due to:
- minor signs of malabsorption associated with mild diarrhea, sometimes chronic;
- abdominal pain ;
- meteorism (swelling of the abdomen, bloating);
- sometimes constipation:
- extra-digestive symptoms such as dermatitis herpetiformis, arthralgia (pain in the joints) and various autoimmune manifestations.

• For this disease, we generally recommend a gluten-free diet: which means completely eliminating wheat, rye and barley from your diet. However, rice, corn and oats are allowed. It is a difficult diet to implement, especially since gluten can be found, without being reported, in cooked meals without cereals or even in the coating of certain medications.