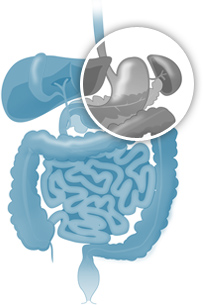 Adenocarcinoma, which accounts for 90% of gastric malignancies, is overwhelmingly the result of H. pylori infection, the progression of which is aggravated by host response or environmental factors. This cancer, which is decreasing in Western Europe and North America, but remains a frequent lesion, with a severe prognosis.

This cancer, which occurs mostly after age 50, is five times more common in men than in women. However, 10% of cases are hereditary, mainly in subjects under 40 years of age.

They can be curative or palliative.

• Surgery, following systematic explorations and biopsies, is a curative process. The importance of the removal (i.e. the operation that extracts the tumour) depends on the location and extent of the tumour. Gastrectomy may be total and even enlarged to the spleen and tail of the pancreas.

• Palliative chemotherapy, although not proven to be effective in survival, allows tumor regression.