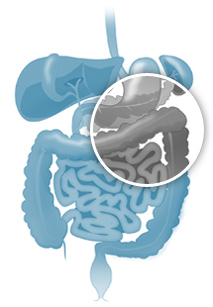 This very rare cancer is extremely serious as it is difficult to detect early. In addition, it is spreading very rapidly and causes liver metastases in 50% of cases.

Mortality increases with age and men are more affected than women. France is a country of medium risk, with a mortality rate of 5,9 / 100 in men and 000 / 2,9 in women.

The risk of pancreatic cancer is higher in a diabetic population than in the general population.

Several symptoms are associated with pancreatic cancer, including:
• abdominal pain which can sometimes suggest colopathy or rheumatic disease, but it is present in 60 to 80% of cases;
• retentional jaundice, sometimes preceded by pruritus, is the main sign of pancreatic cancer;
• weight loss and asthenia which are constant;
• other manifestations such as venous thrombosis, anxiety, digestive bleeding due to portal hypertension or chyleous ascites.

• Then, the treatment requires radiotherapy combined with chemotherapy.

• For drugs, in addition to anxiolytics and antidepressants, the use of Table A analgesics is often necessary.