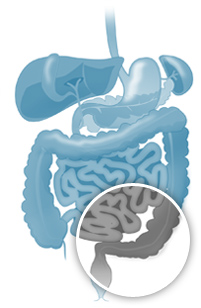 Rectocolic adenocarcinoma (a term that includes colon and rectal cancer) is the second most common cancer among both men and women. It is only surpassed by bronchial cancer in men and breast cancer in women. The risk appears around 45 years of age and increases steadily with age.

• Colon cancer is mainly manifested by :
- iron deficiency anemia, which is characterized by a decrease in the number of red blood cells in the blood due to iron deficiency ;
- transit disorders ;
- hematochemistry, i.e. undigested red bleeding ;
- an abdominal pain syndrome ;
- an alteration of the general state ;
- an occlusive syndrome ;
- a long-term fever.

• Segmental colectomy or surgery to remove the tumor and adjacent colon, is the only radical treatment for this cancer.
• There are palliative treatments, such as cleanliness excision (tumour removal) and bypass surgery.
• As for chemotherapy, no studies have shown its efficacy for this type of cancer.